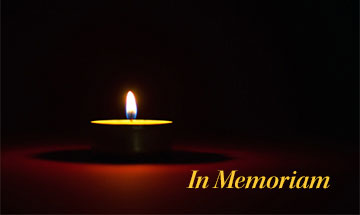 The following remarks were delivered on March 1, 2015, at the Memorial Service for Professor Monroe Freedman.

Monroe was my friend, co-author, intellectual life partner, mentor, and member of the family. There is no one like him; he is irreplaceable.

I’m not the only one who feels this way. I’ve received the most amazing email since his death—from legal academics, the criminal defense bar, the capital defense bar. People describe him as “a giant,” “a legend,” “a towering figure,” “a hero,” “a mensch,” “a sword and shield for all criminal defense lawyers,” “a true original,” “a champion for liberty,” and “a fearless example to us all.”

One member of the American Board of Criminal Lawyers — an organization to which he was proud to belong — wrote: “The phrase ‘a gentleman and a scholar’ was coined for him.”

As Monroe’s Hofstra colleague Eric Freedman wrote: “If any capital defense lawyer anywhere in the country ever faced an ethics issue Monroe had only one question: ‘How can I help?’… [He] always thought there was more he could do to bring justice to the world.”

Although I knew this day would come, I was never going to be ready for it. Around 10 years ago, Monroe called and asked me for a favor. He wanted me to be the executor of his living will. I told him I was honored to be asked — but what does this entail? He said he had a low tolerance for pain. I said, like dental pain?

Then he said he didn’t want to be a burden to his family. I said that it might not be a “burden,” but an opportunity for those who love him to show him how they feel.

He said it sounds like you’re not the right person for the job. I said I couldn’t be more wrong for it. The mere thought of ever losing him was hard enough.

Monroe knew a lot about loss. He had more than his share, with the death of Caleb, Audrey, and so recently, Sarah. I often wondered how he was still standing, and still going strong.

In the last few months, he had an op-ed in the National Law Journal, and he just finished an article for the Hofstra Law Review. He, Alice Woolley, and I just finished co-editing a book called Lawyers’ Ethics for Ashgate Press in the UK.

Part of his resilience was his amazing capacity for friendship. He was making new, dear friends — Paul Butler, Susan Fortey, Jennifer Gundlach — and deepening old ones until the very end. Ellen Yaroshefsky has a word for Monroe’s friends and admirers. She calls us Monroevians.

He had a temper. He called me up one day in the early 1990s and said we were going on “The Phil Donahue Show.” I said, “No I wasn’t.” He said your ticket has been booked, and a limo will be waiting at LaGuardia to take you to NBC Studios. We were to appear on a show with Judge Harold Rothwax and the President of the National District Attorney’s Association about Rothwax’s right-wing, anti-criminal defense screed, Guilty: The Collapse of Criminal Justice.

Monroe could be very fierce about his views and principles — and occasionally brusque. Some people were afraid of him. But he was also fiercely loyal to friends, family, and colleagues.

He could also be gracious in the face of an attack. When Stephen Gillers wrote a paper called, “Monroe Freedman’s Solution to the Criminal Defense Lawyer’s Trilemma Is Wrong as a Matter of Policy and Constitutional Law,” he assigned it as recommended reading to his students.

He was a harsh grader. He and I nearly came to blows when we taught legal ethics together at Georgetown. He maintained that he didn’t want to send lawyers out into the world to hurt clients. I told him I needed more data to be convinced that a three-hour blue book exam had any relationship to actual lawyering.

But he also treated students with an abiding respect and generosity. Whenever a student caught a mistake he made, or offered a new way of looking at things he hadn’t considered, he would give them an engraved pen that read “Excellent job. Monroe H. Freedman.” Because I taught with him I had to have my own pens made that read “Excellent job. Abbe Smith.” I now have other engraved pens for my clinic students as well. They read: “Not Guilty! My two favorite words. Abbe Smith”

He was funny and quirky and incredibly generous. He was a founding member of the Flat Earth Society. He always wore a three-piece suit with a watch chain. He would tell students that the watch chain had great sentimental value because his grandfather sold it to him on his deathbed.

When my son Joe was Bar Mitzvah’d, he wrote Monroe a thank-you note: “Dear Monroe: Thank you for coming to my Bar Mitzvah and for the generous check. I will use it wisely and in moderation.” Monroe is the only person I know who ever replied to a thank you note. “Dear Joe,” he wrote, “I don’t want you to use it wisely and in moderation. I want you to waste it on beer and women.”

Alice Woolley has a son with autism who loves drumming, and particularly loves drumming with surgical gloves. Alice happened to share this with Monroe. A couple of months later a special package came for her son John with some surgical gloves Monroe had found (with help from one of his granddaughters), and a note for John “from your friend Monroe.”

He hated clichés, but was very sentimental (especially about his family). He loved the most obscure New Yorker cartoons — this was the one thing we disagreed on: We never laughed at the same New Yorker cartoons. He was a consumer of both high-brow and low-brow culture: from Shakespeare to airport detective novels. He had an amazing ability to be occasionally bawdy without being crude.

Monroe was an extraordinarily progressive thinker on a wide range of issues — especially for a man of his generation. He annoyed my partner Sally when he first met her by declaring that he was a feminist before she was born. He was one of the least homophobic people I’ve ever met, and represented the Mattachine Society, one of the oldest gay organizations in the country. He had a deep and genuine appreciation for the struggles of the poor. He was a passionate, tireless fighter for racial and social justice.

I want to end with one of my favorite speeches that Monroe used to make to students:

As you contemplate the practice of law, you should understand that you may be called upon to represent people who, out of sheer greed, will hurt and even kill other innocent people. And if you can’t handle that then you should not go into the practice of corporate law.

I could not be prouder of my association with Monroe Freedman. I will miss his courage, his conscience, and his love.

Abbe Smith is Professor of Law, Director of the Criminal Defense & Prisoner Advocacy Clinic, and Co-Director of the E. Barrett Prettyman Fellowship Program at Georgetown University. She and Monroe Freedman were frequent collaborators in teaching and scholarship, coauthoring Understanding Lawyers’ Ethics, co-editing How Can You Represent Those People?, and the forthcoming Lawyers’ Ethics (with Alice Woolley).

« When You Can Contact Others Who Are or Were Represented by Counsel: Part 1 Need Help with an Ethics Question? »